IN SEARCH OF A COVER ILLUSTRATION:

Bride of the Wilderness is the 6th book in THE WOMEN’S WEST series of novels set on the American Frontier. (Books 1 – 4 are currently available as e-books and will soon come out in paperback.)  Since this story takes place in the 1770’s at a fur trade rendezvous and in the French Colonial settlements along the Mississippi, talented cover designer Kim Killion was looking for a historical vignette to use on the cover.

Though I had taken a series of photographs at a rendezvous in Illinois at Fort de Chartres, Illinois several years ago, the images (above) weren’t digital and Kim couldn’t use then.  That’s what sent my husband and me off on a fine spring day to Ste. Genevieve, Missouri to photograph French Colonial architecture.

Did you know that there are only three areas in North America where this kind of architecture has been preserved? They are in the Provence of Quebec, Canada, in New Orleans and southern Louisiana and on the banks of the Mississippi south of St. Louis.

The earliest French settlement along the Mississippi was begun in 1707 by French missionaries and christened Kaskaskia. Later fur traders followed the missionaries’ route—from Quebec, through the Great Lakes and down the Mississippi. Farmers in search of arable land came to Kaskaskia a few years later.

By 1750, the demand for land had grown so that the newer residents of Kaskaskia began to cross to the west side of the Mississippi every day to cultivate the rich bottomland. To this day, this area on the west bank is known as “The Big Field.”

To avoid having to cross the river, the farmers eventually built houses on the western bank and named their town Ste. Genevieve. After a devastating flood in 1785, the town moved to higher ground, an area well back from the river known as “the little hills.”  It is here that we find the charming French Colonial buildings of Ste. Genevieve being both lived in and preserved as museums.

While makeshift housing existed for several years after the flood, once the settlers began to build lasting homes, they did it in what is now called the French Colonial style. Many house of the period were built in the poteaux-en-terre style, which is represented by the Biquette–Ribault house shown here.

With this kind of construction, the builders dig a deep trench that scribes the perimeter of the house.  Once the trenching is completed, tall palisaded stakes are driven vertically into the ground and backfilled to establish the walls.

In the poteaux-sur-solle construction a cedar sill is set into the ground and the vertical pickets are erected on top of the sill to form the walls.

With both these construction methods the space between the pickets is filled with a noggin called bouzillage, made of clay, straw and woven sticks. Applied in layers, bouzillage hardens to a kind of plaster finish. That plaster is often covered with whitewash as a final layer.

Please note: What most of us have come to think of as a “traditional” log cabin, which uses horizontal rather than vertical logs, is more of  an English-German building convention.

After the move to the little hills, structures like the Bulduc House, began to appear. They were built with the same Colonial French designs but of stone quarried from the “little hills” themselves. Extensive flower,  vegetable gardens and orchards surrounded most of the houses in the village.

One of the most distinctive features of these French Colonial houses is the roof, which somewhat resembles a wide-brimmed straw hat. A complex Norman truss system is necessary to support this roofline, but the height and width also provided ample attic space for the storage of grain, foodstuffs or supplies. Since many of the homes in Ste. Genevieve were also places of business, the attics were frequently used as warehouses.

The roof’s deep overhang also provides deep, shady porches on every side of the house. Some of these spaces were enclosed to as separate rooms, but more often the porches were used as workspace or for meals and entertaining. It is believed that this style of roof was a design brought from the Caribbean.

We returned from our fieldtrip with a nearly a hundred photographs. The house my cover designer Kim chose for Bride of the Wilderness stands on St. Mary’s Road at the edge of town. It is known as the Beauveau-Amoreau House, and was built in 1792. 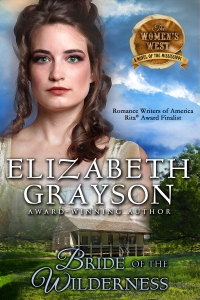 If you are interested in visiting historic Ste. Genevieve, these are some links you might find interesting:

2 thoughts on “IN SEARCH OF A COVER ILLUSTRATION”