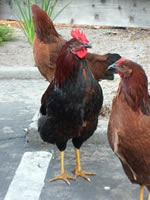 We are down to three chickens now that Big Boy is gone. The remaining three seem shaken by his kidnaping by Animal Protection, and are much more reticent in approaching people. They have a right to be because their days here in the complex, I’m afraid, are truly numbered.

All the residents received the following letter from the management in yesterday’s mail:

We are in the process of relocating our free range chickens that have taken residence in the complex. As much as they are enjoying the arrangement, their early morning (3 A.M.) crowing is disturbing several of your neighbors. Your board has received a petition signed by several residents pleading that we relocate the chickens to a more suitable location.

The Board of Directors has contacted Russell at Apex Pest Control to relocate these friendly, but raucous visitors at his five-acre ranch in the country. They will be joining “Annabel” and “Lulu” in their “Coop of the West” to live out their days. Please be assured that our chickens will not be harmed and Rus has promised to send up pictures once they have settled into their new home. (We may even be able to arrange visitation rights.) The Board and Management understands that some residents have become very fond of our friendly fowl, but have come to the realization that the natural sounds of early morning crowing aren’t compatible with our quiet residential environment.

Please call management with any questions of concerns regarding our feathered friends.

So you see the chickens truly are being “relocated.” It has been fun to have them here, to be able to watch them come ambling down the driveway in the middle of the day or to have them greet us when we get out of the car. (Probably more because they think we’re going to feed them than for any other reason.) Even to hear them crowing early in the morning. Russell’s “Coop of the West” sounds like it’s going to be a good place for them to live. They’ll have shelter, food, the company of other chickens. But will they miss running free?

Good-bye to you Hennie, Pennie, and Little Boy. We’ll miss you all!

Of course you knew that it was inevitable that people in the complex would name the chickens. The rooster with his swagger, his loner personae, and exceedingly loud crowing is called Big Boy. The rusty-brown rooster with the bright red comb and magnificent iridescent green tail feathers is Little Boy. The hens, one black, one brown, are mostly known as “the sisters,” but some folks refer to the brown, biddable biddie as Hennie. The black headstrong one is — yeah, you guessed it — Pennie. 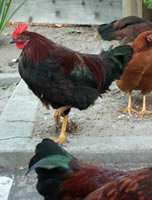 For a while it seemed that there was a romance developing between Pennie and Big Boy, or at least that’s what it looked like to me, though they were a star-crossed pair. While Little Boy, in his I’m-the-boss manner, did his best to herd everyone up onto the fence and into the trees for the night, Pennie would lag behind. She’d stand on the top rail of the fence waiting for Big Boy to arrive.

Some days Pennie waited a good long while. But once he’d finished pecking in the dirt or exploring the underside of the cars in the parking lot, he’d flap to the top of the fence in a single hop. When he did, Pennie would rush toward him, and he toward her, like Cathy and Heathcliff across the moor.

Whether Pennie’s romance with Big Boy would ever have ended up with Pennie hatching a brood of chicks is something we’ll never know. Two days ago, the Animal Control van pulled up below the

chickens’ favorite roosting trees. A man in a jump-suit climbed out, put on leather gloves, and eye protection. Then, taking out a net, he headed down the drive. A few minutes later I saw him return carrying Big Boy upside down and by his ankles.

By the time I ran down to intervene, the man had Big Boy in a cage and had slammed the door to the van. Even with the door closed, I could hear Big Boy was crowing.

“What are you doing with that rooster?” I demanded.

He opened the driver’s door and turned and scowled at me for interfering. “We’ve had complaints about him crowing at all hours, so the county is ‘relocating’ him.”

I thought briefly about following the van down to Animal Control and bailing Big Boy out. But if I brought him back to the apartments, his recapture was inevitable. Instead, I stood there feeling helpless. I watched the van roll down the drive and wondered if the other chickens would miss Big Boy. I suspected Pennie would.

I went inside, scooped up some feed and sprinkled it at the edge of the driveway. It seemed like the least that I could do.

Well, apparently our townhouse complex isn’t the only place having a debate about where chickens belong. In today’s newspaper I saw a letter to the editor from a woman protesting a statute the county is considering that would ban the keeping of backyard chickens. Well, not all chickens, actually. Roosters, specifically.

As it turns out, what the county hopes to do is allow the keeping of laying hens. Laying hens are useful birds; we can eat their eggs. We can whip those eggs omelets with cheese and ham. We can add a few ingredients and bake a cake. We can make a lovely custard sprinkled with cinnamon.

Occasionally, you might hear some clucking from a hen or notice a a disgruntled cackle and a little wing flapping between two biddies who claim the same place to roost. But they’re quiet and biddable for the most part. Roosters crow — loud and long and early in the morning. Therein lies the problem. Feeding us is all well and good. Waking us up, at least according to the county supervisors hereabouts, isn’t something they can sanction.

Of course, what I wonder about the ordinance the county has proposed is whether it favors hens over roosters. Does it declare one sex of chicken to be superior to the other? Could such a statute be considered sex discrimination?

The homeowner who wrote the letter in the newspaper was outraged that such a ban is even under consideration. Since she breeds chickens for fun and profit, banning roosters would devastate her business and deprive her of her livelihood – because without roosters there would be no chicks.

So is this a variation on the age-old the question: which came first, the rooster or the egg?

web services for authors -- and others